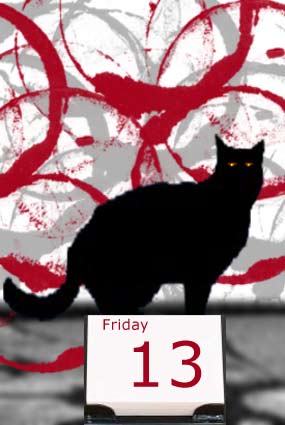 I tend to be slightly superstitious, so when I opened my “day planner” and discovered it is Friday the 13th (the ONLY one this year), I pondered what might go wrong in the next 24 hours.

Friday the 13th, has been considered a day of bad luck in various countries for many centuries.  Wonder why?

I guess because the number 13 has been assigned negative significance, but why Fridays?

On that date, officers of King Philip IV of France arrested masses of Templar knights for heresy, blasphemy and other activities. It is believed that hundreds of Templars were tortured or executed by burning at the stake despite popular belief that none of the charges were proven.

It is easy to blame Friday 13 for unfortunate events but this day was not always believed to be unlucky in history and in some cultures. The ancient Egyptians thought the number 13 was lucky because they believed that the 13th stage of life was related to the afterlife. After the decline of the ancient Egyptian civilization the number 13 was still associated with death but in a fearful manner.

However, Friday is seen as the holiest day of the week in the Islamic world. It is set aside for communal worship where Muslims attend the Mosque. For people living in countries of the Arabian Peninsula, as well as Iraq, Friday is regarded as a day of rest.  I think I’ll adopt that position.

Since I had my all time worst day yesterday (had a tooth pulled so my new braces will have room to straighten my teeth, finally filed my taxes late, and had to round up the Sheriff and Police Chief for help with a crazy person), I choose to expect good things today.

Incidentally, the fear of Friday the 13th, also known as paraskevidekatriaphobia. Say that three times fast!  Best wishes for a lucky Friday 13th!

My son, William, agrees that Friday 13 has gotten a bad rap.  Yesterday while he was walking his dog, he found a $5 bill laying on the ground.  He went and bought chips and dip for his staff at the hotel.